Experience a humorous conversation between the two world-famous composers – Wolfgang Amadeus Mozart – the prodigy from Salzburg and Johann Strauss Son, the real Viennese among the great composers, also known as the “King of Waltz”.

to the next highlight

ook forward to a witty dialogue between the two composers Mozart & Strauss, accompanied by their best musical delicacies. Mozart is known for his works – “The Little Night Music”or “The Magic Flute”. Johann Strauss Son has made history as the composer of the wellknown “Danube Waltz”.

Wolfgang Amadeus Mozartwas born on January 27, 1756 in the famous Getreidegasse in Salzburg. He was the youngest child of Leopold Mozart and Anna Maria (née Pertl). As a child he was often called Wolferl, as an adult he liked to call himself “Amadé” in the French-Viennese way.

His ambitious Father taught him together with his older sister Maria Anna, called Nannerl. At a young age, he appeared as a“child prodigy” on concert tours throughout Europe. Hisfirst concert in Vienna was in 1762 when, at the age of six, he appeared in the Hall of Mirrors in Schönbrunn, together with his sister, for the Habsburg ruler Maria-Theresia. Then he jumped on her lap and kissed her “righteously” on the cheek.

Numeroustrips through out Europewere to follow. The first stations were Germany, France, Great Britain. Later, there were longer trips to Italy and again and again he returned to Salzburg, where he was the concertmaster of the court orchestra in the service of Prince Archbishop Hieronymus Count Colloredo.

Over the years, more and more tensions arose in the archiepiscopal service. The break finally came through the famous “kick”,which was missed by Count Arco, in the Vienna Deutschordenshaus. So Mozart was promoted into self-employment with a kick you could say.

He began his career as a freelance artist in Vienna in 1781. He gave piano lessons,played in concerts and composed for a variety of clients. ogether with Haydn and Beethoven he founded the Wiener Klassik (Vienna Classicism).

The musical competition between Mozartand court composer Antonio Salierihas also made history. Emperor Joseph II asked both of them to write a short opera and perform on two opposite stages in the Orangerie in Schönbrunn. The difference in rank was noticeable – Mozart’s opera was performed as a prelude and Salieri’s play lasted twice as long and was a huge success. This was also reflected in the payment, as Salieri received the double salary.

In St. Stephen’s Cathedral in Vienna, Mozart married Constanze Weber and spent happy years with her at the Mozarthaus in Domgasse, which is still preserved today. They had six children, of which only two sons survived. Here were his most famous works, such as “Le nozze di Figaro”, “Don Giovanni”, “A little night music“.

Around 1790 Mozart was at the peak of his career. This was followed by the works “Cosi fan tutte”, “La Clemenza di Tito”and finally his most famous and probably most famous work, the Singspiel “The Magic Flute”.

The last three years of his life (1789-91) were artistically and financially successful for Mozart. he “Magic Flute” was a great success, yet he got into debt again and again. Together with Emanuel Schikaneder, the theater director of Freihaustheater auf der Wieden, he was a free mason in the Masonic lodge “Zur Wohltätigkeit”.

The Requiem in D minor was his last composition and meanwhile he became seriously ill. At the age of only 35, he died on 5 December 1791 of a rheumatic fever, called “Frieselfieber”. He was buried, as was customary at the time, in a shaft grave at the St. Marx cemetery. Later it was not possible to locate the exact place of the burial site. Today we can visit another grave of honour at theCentral Cemetery and admire the Mozart statue in the Burggarten. 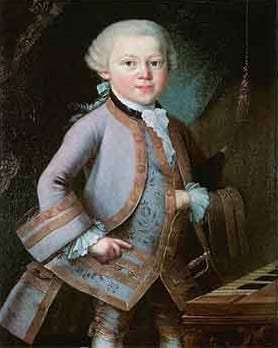 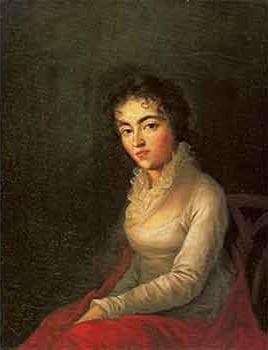 Johann Strauss Son, the “King of Waltz”, was born on October 25, 1825 in Vienna anddied in 1899 also in Vienna. He was a composer, bandmaster, son of Johann Strauss father and brother of Josef and Eduard. Even as a child, he harbored the desire to become a musician, which his father rather displeased.

The father was also musician and court master of the Emperor, but left the family because of another woman. His mother Anna now supported her son even more to become a successful composer.

At the age of nineteen, Johann Strauss Son made his debut with his band at Dommayer’s Casino in Hietzing and became his father’s biggest competitor. He became even more successful than his father. His concert tours through Europe and the USA led to a veritable “Strauss-Mania”.

His first years were marked by the competition with his father. Since his Father recruited his audience from the bourgeois and highest population circles, his son initially turned to the students, ethnic minorities and marginalized groups. In addition, he sought engagements outside Vienna, which led to numerous concert tours throughout Europe. 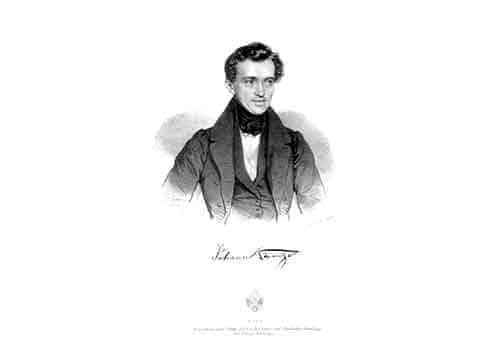 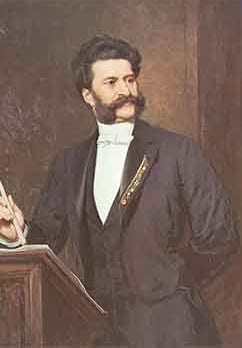 After his father died suddenly of scarlet fever in 1849 at the age of only 45, the son was able to take over his father’s orchestra. It was not until 1852 that Johann Strauss Sohn was entrusted with the performance of music at the imperial court. Later thetitle of k.k.Hofballmusik-Direktor followed.

The operetta “Fledermaus” and the “Gypsy Baron” created further hype. He was showered with invitations and honors as the Waltz King. During the day he composed countless waltzes and operettas, and in the evening he played late into the night. He became famous worldwide for the Donau Waltz, which is considered the secret anthem of Austria.

Strauss’ enormous workload took its toll: physical breakdowns necessitated a series of spa staysin 1853-55. He was inspired in Badgastein and then spent a few seasons as a guest in Pavlosk near St. Petersburg, where he also won over the Russian tsar’s family. It was the performances in Pavlovsk thatfinally made Strauss’s son step out of his father’s shadow in Vienna.

In 1862 he married Henriette, a former singer seven years his senior, called Jetty, who also became his manager. After she died in 1878, he married the actress and singer Ernestine Dittrich, called Lili, who was 25 years younger. However, it soon came to divorce because of another man. He consoled himself with Adele Strauss, who was 31 years younger. In order to marry her, he converted from Catholicism to Protestantism and even left the Austrian state and became a citizen of Saxe-Coburg and Gotha. 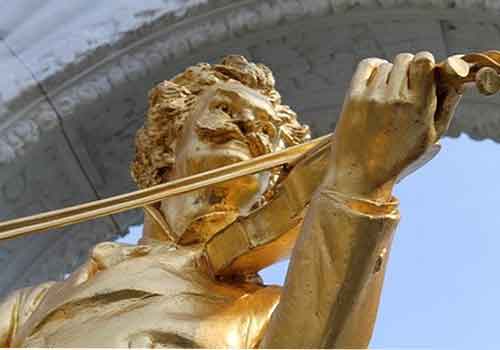 In 1862 he married Henriette, a former singer seven years his senior, called Jetty, who also became his manager. After she died in 1878, he married the actress and singer Ernestine Dittrich, called Lili, who was 25 years younger. However, it soon came to divorce because of another man. He consoled himself with Adele Strauss, who was 31 years younger. In order to marry her, he converted from Catholicism to Protestantism and even left the Austrian state and became a citizen of Saxe-Coburg and Gotha.

In 1872 he embarked on his longest concert tour, which took him across the Atlantic to the “World Peace Festival” in Boston and on to New York. However, he quickly suffered from homesickness and was glad to be able to make a guest appearance in Vienna again.

His monument in the City Parkis one of the most photographed in Vienna and we can visit his honorary grave at the Central Cemetery. Furthermore, his former residence on Praterstraße, where he composed the famous Danube Waltz, can be visited. In addition, there is an interesting museum about the Strauss dynasty in the 9th district.

To the next highlight

We ask you 15 minutes before
Tour start to arrive

A partner company of the
Niederösterreich-CARD & Wien Karte