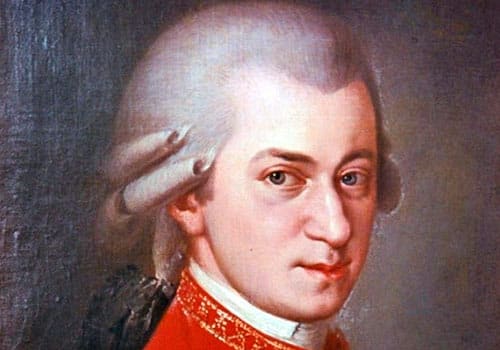 At what age did Mozart give his first concert in Vienna? Where did he perform and who did he “righteously” kiss off? Who traveled with him most of the time? Where can we find his children’s violin on display? Was passierte in Wien? What event changed everything?

The musical genius was born on January 27, 1756 at 8 o’clock in the evening in Salzburg at Getreidegasse 9.

World. The next day followed the baptism in the Salzburg Cathedral with the full name Joannes Chrysostomus Wolfgangus Theophilus. He was called Wolferl, Wolfgang or also Woferl.

He was the seventh and second surviving childof his parents Leopold Mozart, a German composer from Augsburg and his Wife Anna-Maria Mozart, née Pertl, from St. Gilgen am Wolfgangsee. His older sister Maria Anna, called “Nannerl” was born in 1751and died at the age of 78. The remaining five siblings all died within the first year of life.

At the age of four,he and his sister, who was five years older, received their first piano andviolin lessons. The father also taught the children general education. Mozart’s child violin was long in the possession of his sister Maria-Anna and can be seen today in the Mozarthaus Salzburg. Most recently, in April 2018, the violin was played during an Austrian state visit to the People’s Republic of China as part of a state banquet.

Mozart’s talent in piano and violin playing was obvious and in 1762 his first concert toursand performances with his sister Nannerl followed. Munich and Passau were on the program, followed by Vienna. There they wanted to present the two siblings to the imperial court.

Mozart was six years old when he and Maria Anna captivated the imperial family in the Hall of Mirrors at Schönbrunn Palace on October 13, 1762. Maria Theresa, Franz Stephan and their children were enchanted by the performance on piano and violin.

According to an anecdote, the children all played together after the concert in the Hall of Mirrors at Schönbrunn Palace. Mozart slipped, was caught by the little Archduchess Marie-Antoinette and announced that he would marry her when he grew up. But in life, as we all know, things always turn out differently than planned.

The words from Leopold Mozart’s letter to Salzburg about the following incident are well-known: “Wolferl jumped onto the empress’s lap, got her around the neck and kissed her righteously”.

Wolferl and Nannerl received 100 gold ducats, 450 guilders and the precious embroidered, cast-off clothes of Maria Theresa’s children for their performance. It was customary at that time to give away discarded clothes of the emperor’s children to their subordinate aunts.

What happened next in Mozart’s career? This was followed by concert tours throughout Europe to the point of complete exhaustion. Everyone wanted to see the wunderkind from Salzburg. Munich, Paris, London, Brussels, Amsterdam were the first stops. The trips to Italy in 1771-72 were particularly successful. Smallpox was rampant in Europe at the time and Mozart was also afflicted with it, as scars testified.

Back in Salzburg in 1772, Mozart was promoted by the new Prince-Archbishop Hieronymus Franz Joseph von Colloredo to concertmaster of the Salzburg court orchestra. The latter wanted to keep the successful musician in Salzburg, which was only successful for a few years. Mozart continued to go on concert tours and sought better employment in neighboring countries.

He auditioned in Munich and Augsburg, but was not hired, but the stay was nevertheless fateful, because in Munich he met theWeber family with their four daughters. First he fell in love with the eldest daughter named Aloisia, in the end years later he marriedthe youngest, named Constanze.

In 1778, at the urging of his father, he traveled on to Paris, but was never employed. Instead, his mother, who was traveling with him, passed away. This was very tragic for Mozart, who was 22 years young at the time. He traveled back to Salzburg months later, where he was appointed court organist. This did not last long, because the free spirit Mozart was drawn away from Salzburg via Munich to Vienna.

In 1781 it was enough for the archbishop that Mozart, although officially in his service, did not return to Salzburg. He dismissed him from his services by the count’s emissary, theprince-archbishop’s chief kitchen master Karl Joseph Maria Count Arco, who gave him the famous “kick in the foot” or, more directly, the so-called “kick in the ass”.

This event kick-started Mozart’s independence as a freelance artist in Vienna. He officially resigned from his Salzburg ministry, and began his life in “freedom in Vienna”. He gave piano and violin lessons and played in concerts.

Privately and professionally,the most productive and creative phase of his lifenow began. He married Constanze Weber in St. Stephen’s Cathedral on August 4, 1782. She gave birth to six children, but only two of her sons reached adulthood. From 1784-87he lived with his family in the Mozart House, the only place that has survived and can be visited. The other 16 or so places where Mozart lived in Vienna are mostly only marked with a commemorative plaque.

An excerpt from his artistic creative period with the most famous works:

Mozart was doing very well financially during these years. He earned well, but also spent a lot. Some compositions were successful, some less so. In 1787 his father and patron Leopold Mozart died. Thanks to Mozart’s many letters to his father, Mozart’s life is well documented.

In the fall of 1791, Mozart fell ill with “hietzigen Frieselfieber” and was dead within a few weeks. He died just before his 36th birthday on December 5, 1791. A memorial plaque at the place of death in Rauhensteingasse 8 reminds us of this. He was in the middle of working on the “Requiem” that his student Franz Xaver Süßmayer was completing

There has been much speculation about his sudden and surprising death. One suspected the Syphillis, a poisoning, the consequences of the many bloodlettingetc.. Until today there is speculation, nothing could be proven.

Mozart was consecrated in St. Stephen’s Cathedral and buried in a common shaft grave at St. Marx Cemetery. It was in line with Joseph II’s reform to put several people in one grave to save costs. So he did not die impoverished, as was often assumed. Unfortunately, they did not mark the exact spot, so today there is a monument fairly centered at the St. Marx cemetery, marking the approximate spot. At the Vienna Central Cemetery there is a grave of honor for Mozart at the Musicians’ Grove.

No other composer became as world famous as Mozart. When one thinks of a composer, the name Mozart comes to mind first for most people. He isimmortalized on banknotes and coins. Who does not like the delicious Mozartkugeln made of chocolate, nougat, pistachios and marzipan.

In Vienna we meet him in many places: the Mozart House, the only preserved residence in Vienna, the Mozart statue in the Burggarten, the Café Mozart. Mozartgasse and Mozartplatz in Vienna- Wieden (4th district) were named after him. In the center of the square stands the Fountain of the Parrot, in memory of the main character of his Singspiel “The Magic Flute”.

In 1984, Mozart made it to Hollywood. His life was filmed with Tom Hulce as Mozart.

Time Travel Tip: At Time Travel you will get a taste ofMozart’s artistic work, which you can deepen in the Mozart House, in theHouse of Music, at the Mozart Monument in the Burggarten. 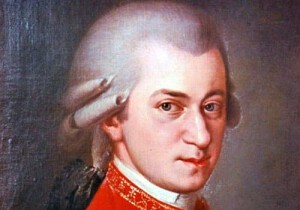 At what age did Mozart give his first concert in Vienna? Where did he perform and who did he “righteously” kiss off? Who traveled with

At what age did Mozart give his first concert in Vienna? Where did he perform and who did he “righteously” kiss off? Who traveled with

We ask you 15 minutes before
Tour start to arrive

A partner company of the
Niederösterreich-CARD & Wien Karte